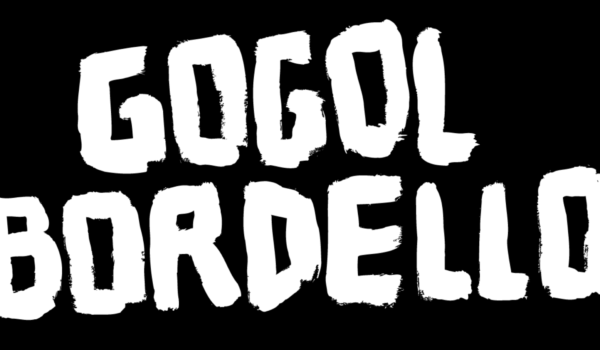 Take What You Can Carry
(in English and Ukrainian)

out via Casa Gogol / Cooking Vinyl 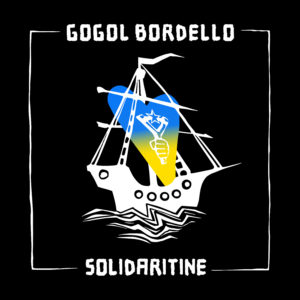 Preparing for the release of their eighth studio album, SOLIDARITINE, on 16th September 2022 via Casa Gogol/Cooking Vinyl, GOGOL BORDELLO are today proud to release second single “TAKE ONLY WHAT YOU CAN CARRY (featuring KAZKA)”. 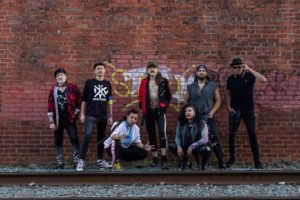 Featuring popular Ukrainian electro-folk pop band KAZKA, “Take Only What You Can Carry” is a call to arms that highlights each of band members’ exceptional contributions from Boris Pelekh’s searing guitar and Sergey Ryabtsev’s violin which kicks off the song at a frenetic level.

The vocal interplay between Gogol’s fiery vocalist Eugene Hutz and KAZKA vocalist Oleksandra Zaritska hammers home the urgency and impulsiveness of the plight of the citizens of their Ukrainian homeland. The song’s adrenaline-fueled rush is testament to Gogol’s power, both in studio and live, where the band are hailed equally in awe-inspiring adjectives.

“She is a raucous rock singer, bringing an emotional message of the uprooted people whose lives were destroyed by this fucked up war in Ukraine,” says Eugene about his singing partner Oleksandra on the track. In addition, the track is unique to Gogol’s oeuvre in that the lyrics were written by Ukrainian poet, novelist, essayist and friend Serhiy Zhadan (who also appears on the track “Forces of Victory”).

“Oleksandra does great justice to the lyrics. It’s something that I’ve never done before; use someone else’s poetry for lyrics. But here, the idea was to bring three diverse Ukrainian artists together into a knuckle for a continuous morale boost to the fighters and refugees. Plus, I really love Zhadan’s poetry, he is a wordsmith from God. No wonder he is nominated for the Nobel Prize.”

“There’s the excitement of so many unique players swinging in and out of musical view like pirates whipping the ship within inches of its capsize but only by the strength of the songs does it keep from tipping over,” says Schreifels about producing the record. “Every song on this record has its central lyrical point to make, backed with passion, intelligence, and an unyielding sense of fun that pairs effortlessly with the music. Despite the amount of care and attention to detail, the key to a great Gogol Bordello song is its sense of joy and natural occurrence, as if it had just appeared out of the ether. “

SOLIDARITINE was produced by Walter Schreifels and will be released on 16th September 2022 on CD/Digital (with vinyl coming in early 2023) via Casa Gogol/Cooking Vinyl.

More info on SOLIDARITINE:
With the more hardcore leanings of SOLIDARITINE, the sense of urgency and a fresh bolt of energy returns the band to their incendiary beginnings while keeping their agit prop leanings front and center. The opening track “Shot of Solidaritine” kicks off acoustically before launching into a raucous sprint at a breakneck pace.

Gogol takes the post-hardcore classic “Blueprint” by Fugazi and injects their trademark Eastern European stomp. H.R. of Bad Brains guested on “The Era of the End of Eras,” blessing the track with a cameo punctuated by a key moment from the Bad Brains anthem “Sailin’ On.” He smiles, “Walter and I were in tears when H.R. sent it in.”

Formed in 1999, Gogol Bordello took their style of Eastern European-influenced gypsy punk and doused it deep into the underground rock of New York City. Imminently beginning a U.S. tour, Gogol Bordello have been praised for their recorded material but especially heaped with accolades about their live shows.

Pitchfork proclaimed, “Eugene Hutz and his acoustic guitar slapping (think Les Claypool’s hands, but on a six-string) and waving arms summoned the crowd which quadrupled in size by the set’s fourth song. Festival goers were literally running toward the stage” while Consequence hailed “the ever-evolving collective has defied the boundaries of continents and genres in their quest for spiritual illumination through gypsy punk.”